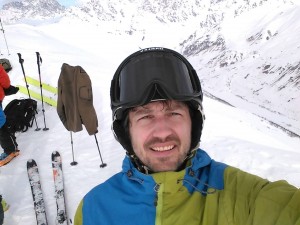 Michal is our man behind the video camera and drone, and he is responsible for all video production at Snowbusters. You can check out his work at JOKERFILMS:

Born in the Czech Republic Michal started skiing at an early age. Soon, the hobby became a passion and local hills were swapped for the Alps, the Cascade Mountains in Oregon, Canadian Rockies, New Zealand mountains, the Caucasus in Georgia, and elsewhere.

Michal is part of our media team. You can always find him hustling with cameras, GoPros, drones, gimbals, and tripods. Yes, that's a hell of stuff to carry around but don't worry, Michal is always committed to delivering perfect footage of both shredding the steep terrain and behind the scenes of our ski trips. He has a broad experience in video production working for several major TV productions. He is the man behind both shooting and editing our videos.