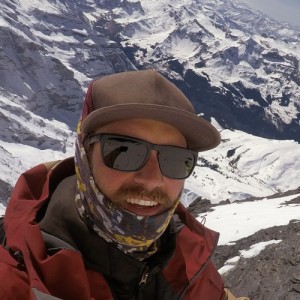 Adam is our main photographer and a coach for:

Adam was born in a city but was destined for the mountains. At an early age, he began seizing every opportunity to explore nature — in particular his native Czech mountain. Adam's passion for nature could only be matched by the challenge of the sport. It all began with him and his cousins shredding on a local hill off a countryside home. It had one rope-lift and a 400m (120ft) long slope, but this was their haven, this was home.

Soon, the feeling of two wooden boards gliding on snow became Adam's focus. He had a short stint of ski racing, but a starting gate was too limiting, and his desire to explore brought him to the backcountry. Groomed slopes to untouched powder, free-riding and ski touring become his everyday routine.

From those tiny Czech mountains and Austrian 3000m peaks to Switzerland’s tallest mountains in Europe, the outdoors is his life. Adam takes the mountain seriously and has developed his mountaineering skills and intimate knowledge of this terrain, making him a well-equipped ski and ski touring instructor.

Adam has a background in Sport Management and Photography and is currently part of our ski instructor and touring team.